Court Rules Louboutin’s Red Soles are Fashion, not a Trademark 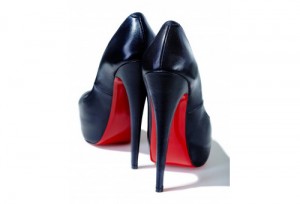 A federal court in New York has ruled that designer Christian Louboutin (“Louboutin”) does not have the exclusive right to make women’s designer shoes with red soles.

In 2008 Louboutin registered a trademark (Reg. No. 3,361,597) for women’s shoes with red soles, claiming the exclusive right to make shoes with red soles for “women’s high fashion designer footwear.”  The mark as filed with the United States Trademark office appears below.

Louboutin’s red sole shoes are popular with the rich and famous as they are ridiculously expensive.  The red soles apparently let people know at a distance that you spent a fortune on a pair of shoes.  The red soles have even inspired a 2009 song by Jennifer Lopez called “Louboutins” with the verse “I’m throwing on my Louboutins” repeated thirty-five times during the song along with the lines “Watch these red bottoms/ and the back of my jeans; Watch me go, by baby.”

In late 2010 and early 2011 Yves Saint Laurent (“YSL”) another high end maker of women’s shoes released four models of all red shoes with red soles.  Louboutin sued YSL on the theory that no one should be able to use the color red on the sole of the shoe even if the entire shoe is red.

Louboutin thereafter filed a motion for a preliminary injunction to halt the sale of YSL’s all red shoes.  Louboutin’s motion spends a lot of time educating the court as to the popularity of its shoes, the fame of its red soles, and the popularity of the shoes among real and fictional celebrities including Oprah and Barbie.

Without a doubt Louboutin has popularized the red sole shoe look with enormous media exposure in recent years.  The question for the court, however, is whether a red sole on a shoe serves a fashion function or is a legitimate trademark. Louboutin argues that because those familiar with luxury footwear now equate red soled women’s shoes with Louboutin that association amounts to a trademark.

In it’s opposition to the motion, YSL argues that shoe sole color is part of the fashion of the shoe, not a trademark.

Louboutin asks this Court to become the first ever to recognize trademark protection for a purported mark consisting solely of a color on a fashion item without even trying to explain how it avoids the aesthetic functionality bar. The Supreme Court has held that, where “color plays an important role (unrelated to source identification) in making a product more desirable,” the functionality doctrine bars trademark protection. That is inherently the case in the fashion industry, where aesthetic use of color is literally the function of the products.” . . . Allowing Louboutin to claim a monopoly on the use of red on a part of a shoe (and, by extension, on the right to make all-red shoes) would have an unprecedented, anti-competitive effect in limiting the design options available to all other designers.

YSL also argues that red soled shoes are not exclusive to Louboutin.

YSL goes on to argue that because both its shoes and Loubutin’s shoes are ridiculously expensive and purchased in high end stores by extremely fashion conscious consumers, no one is going to purchase a YSL shoe on the mistaken belief that it is a Louboutin.

Louboutin amazingly argues in its reply brief that color is not aesthetically functional in the case of shoe soles.  It further states that YSL should just pick a different shade of red if it wants to make all red shoes. Louboutin owns its particular shade of red for a shoe sole and no else can use it.

Louboutin’s trademark covers a specific red for outsoles, not the broad spectrum of red hues. Many shades of red and other colors are available for use by any party who wants to produce a shoe, “monochrome” or otherwise, without infringing the Red Sole Mark. Even Louboutin’s red color is available for competitors on other, more visible, parts of the shoe.

Louboutin also argued that if an injunction is not issued the floodgates will open to competitors.  Presumably this will result in the non-rich and famous being able to purchase shoes with red soles.  Once this style is available to the common unkempt masses,  Louboutin’s signature style will be forever tarnished.

The court, however, was not persuaded and ruled that in the fashion industry, color serves ornamental and aesthetic functions which cannot be trademarked.

Because in the fashion industry color serves ornamental and aesthetic functions vital to robust competition, the Court finds that Louboutin is unlikely to be able to prove that its red outsole brand is entitled to trademark protection, even if it has gained enough public
recognition in the market to have acquired secondary meaning. The Court therefore concludes that Louboutin has not established a likelihood that it will succeed on its claims that YSL infringed the Red Sole Mark to warrant the relief that it seeks.

An appeal is currently pending before the United States Court of Appeals for the Second Circuit.