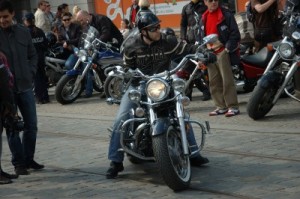 Since at least 1938, the Sturgis Motorcycle Rally (“Rally”) has been held each year in and around the City of Sturgis, South Dakota and has attracted hundreds of thousands of visitors to the area.  This year, a newly formed organization, Sturgis Motorcycle Rally, Inc. is claiming exclusive trademark rights to the city’s name and seeks to obtain a royalty on products which bear the name “Sturgis.”

Initially the Sturgis Mark was rejected for being primarily geographically descriptive– that is, simply referring to the city of Sturgis, South Dakota.  This initial refusal was overcome by Chamber of Commerce by claiming five years of substantially exclusive use of the STURGIS Mark.   (Which, considering all of the memorabilia sold at the Rally by so many different vendors seems quite a stretch.)

SMRI thereafter sought to enforce its trademark “rights” with threats and litigation, including a lawsuit filed June 22, 2011 against Sturgis vendors Rushmore Photo and Gifts, Inc. (“Rushmore”) and JRE, Inc. (“JRE”).  Rushmore and JRE responded to the lawsuit by filing counterclaims for non-infringement and invalidity of the Sturgis Marks as well as for fraud.

Rushmore and JRE thereafter filed a surprise motion for a temporary restraining order and preliminary injunction on August 3, 2011 to prevent SMRI from carrying out threats of confiscating vendor merchandise when the Rally begins Monday August 8, 2011.  Rushmore’s motion argues that Sturgis Mark was fraudulently obtained by SMRI and is invalid and unenforceable as a trademark.  In it’s motion, Rushmore attached declarations from twenty-eight (28) Sturgis vendors who state that they have been selling items bearing the city’s name for years, have never paid anyone a licensing fee, and that the Chamber of Commerce and SMRI have no right to prevent others from putting the city’s name on merchandise sold at the Rally.

The next day, August 4, 2011, SMRI filed its opposition to the injunction motion.  SMRI argues that its trademarks are presumed valid, Rushmore has not met its burden for injunctive relief, and that the defendants are creating “consumer confusion.”  (Presumably someone who buys a sticker or key chain which says “Sturgis” will be confused into thinking that the product is endorsed by the Chamber of Commerce or SMRI — just like a shot glass which says “London” is clearly endorsed by the Queen.)  SMRI also points out that it has donated its licensing fees to many great causes in and around Sturgis and therefore the court should cut SMRI a break.

On August 5, 2011, the court held a hearing and is currently considering the evidence presented.  It is unknown whether a ruling will be issued during the Rally being held this week.

The judge denied the motion for TRO and the preliminary injunction.  This ruling is not surprising given the difficult burden of showing irreparable harm (that is, harm which cannot be remedied by money) in a case that is essentially about money.  It is being misreported that the judge ruled that only officially licensed merchandise will be allowed at the rally.  The judge, however, may no such ruling as that issue was not before the court.  SMRI may, however, make such a request in the future, but it is unlikely to be heard prior to the end of this year’s rally.