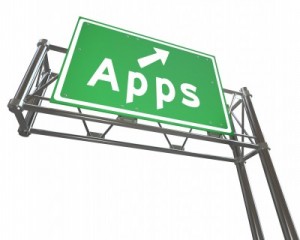 This is the second in a multi-part series.  If you have not read Part 1 yet, you may want to read that part of the Apple App Store trademark saga first.

Not long after Apple filed its trademark application, it received a rejection from the U.S. Trademark Office.  The reason– you cannot get the trademark “APP STORE” for a store that sells apps.  In trademark lingo that’s called a Section 2(e)(1) refusal, which means that the applied for mark has been refused because it is “merely descriptive” of its services.  As evidence — and as a possibly unintentional jab at Apple — the Examining Attorney used the definition of “app” from Microsoft’s Encarta English Dictionary.

The term “APP” is not merely descriptive. In fact, it is completely arbitrary. . . The term “APP” may, arguably, sometimes be used as a slang abbreviation for the word “application”, but this term has many other incongruous meanings. . . .”APP” is an abbreviation for a number of app-formative words, such as apparatus, apparent, appendix, applied, appointed, approved and approximate . . .

Or maybe “app” actually does mean “application,” which is exactly what everyone understands the term “app” to mean in the context of an “app store.”

Apple also tried arguing that the term APP STORE is actually a double entendre.  The Trademark Office will accept a descriptive trademark which has multiple meanings if at least one of the meanings is not descriptive.  Here, Apple argued that it’s mark APP STORE might be short for Apple Store.

Well, the Trademark Office wasn’t falling for the idea that “app” could have another meaning to a consumer other than “application” (such as “Apple” or perhaps “appendectomy”). A month later in March 2009, the Examining Attorney issued a Final Office Action, rejecting Apple’s arguments with a much simpler argument.

The term STORE is defined as “a place where merchandise is offered for retail sale to customers.” Encarta World English Dictionary [North American Edition]. Copyright 2009 by Microsoft Corporation. (See attachments).
. .
In this case, the mark APP STORE merely combines descriptive terms without creating a new nondescriptive meaning.
. . .
The examining attorney respectfully disagrees with the applicant’s assertion that the mark is arbitrary and/or that it creates a double entendre.

So that was that.  But Apple was not ready to give up.  On September 18, 2009, Apple submitted its request for appeal along with a response to the trademark office’s final office action.  This time, Apple had a new argument.  In fact, a billion arguments.  On April 23, 2009, Apple had delivered its one-billionth app.  That’s a billion reasons right there that Apple owns the term app store.  All of you Apple competitors out there need to come up with your own name like “application store.”

And the trademark office agreed.  Apple’s trademark application was approved under Section 2(f) of the Trademark Act. Due to Apple’s commercial success and advertising efforts the initially descriptive mark had “acquired distinctiveness” or “secondary meaning” with consumers.  And that was that.  At least temporarily.

Next up in this series:  Part 3, Apple vs. Microsoft.