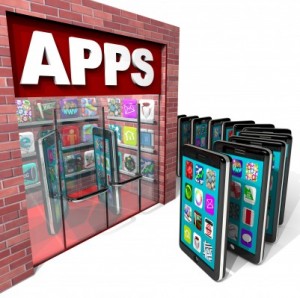 This is the first in a multi-part series.

As has been widely reported, Apple is claiming the exclusive right to use the term APP STORE for an online store which sells apps.  Apple recently sued Amazon.com for using the term and is currently in a fight with Microsoft over at the trademark office.  This multi-part series will review and analyze the history, the proceedings, and the players involved in the latest trademark wars.

Our story of the APP STORE trademark begins at the United States Patent and Trademark Office long before the iPhone was even a gleam in Steve Job’s eye.

In 1998 Sage Networks, Inc. of Cambridge, Massachusetts was the first company in the U.S. to apply for the trademark APPSTORE.  In it’s application Sage Network’s APPSTORE services were described as  “providing computer software application hosting services by means of a global computer information network, where such services allow multiple users to rent software applications developed by applicant or third parties.”  Sounds a lot like an app store.

The next company to apply for an app store trademark was Salesforce.com.  On June 14, 2006, two years before the Apple App Store debuted  Salesforce.com filed for the mark APPSTORE for the services, “Operating on-line marketplaces for buying, selling and exchanging computer software and on-demand applications.”  Sounds a lot like an app store.

The application was initially rejected for being merely descriptive of — well — an app store.

After some back and forth with the trademark office Salesforce.com, Inc. deleted the descriptive services, namely “Operating on-line marketplaces for buying, selling and exchanging computer software and on-demand applications.”

With the removal of the most descriptive services, the application was approved.  The application published for opposition in August 2008, one month after Apple’s app store debuted on July 10, 2008.

After launching its app store Apple quickly filed its trademark application for APP STORE. But wait.  There was a surprise in the U.S. trademark application.  According to the application back on March 7, 2008, Apple  filed for APP STORE in TRINIDAD AND TOBAGO and was using that application as a basis for the U.S. Application under an international trademark treaty (the Paris Convention).  Why file in Trinidad and Tobago first?  Beautiful weather?  The location of Steve Job’s secret base?  Probably not. Most likely it is quick and easy to get a trademark issued in the Caribbean nation and by filing pursuant to the Paris Convention, Apple’s application in the U.S. can use the Trinidad and Tobago March 7, 2008 filing date, rather than its later July 17, 208 filing date.  Most importantly, however, the Trinidad and Tobago trademark office does not have any online search capabilities making it difficult, if not impossible for pesky bloggers to learn of the new Apple trademark prior to the launch of the App Store.

Apple also used its Trinidad and Tobago trademark under the Paris Convention for other parts of the world including the European Union.  Apple’s EU App Store trademark has already issued.

Next up in this series:  Part 2 Apple vs. the Trademark Office