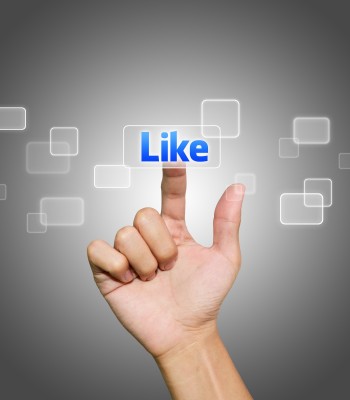 On April 21, 2010 Facebook filed fourteen applications with the United States Patent and Trademark Office trying to corner the word mark “like” as well as the stylized version of the mark with the now famous thumbs up.

The applications were filed by Facebook for all manner of services, including “dating services,” “self-fulfillment,” “bill payment services” and a “virtual currency.”  (So be careful when you click that “Like” button…)

Facebook’s seven design mark applications for the stylized version of the word “like” alongside a thumbs up are being blocked by earlier registrations for different thumbs from the likes of TiVo and Searchteq, a German search engine.

To add insult to injury, Searchteq is using it’s registered thumb trademark to ask its users to like it on Facebook.

The fact that there are multiple thumbs-up registrations for similar services is actually helpful to Facebook. Arguably its thumbs up is at least as different from TiVo’s and Searchteq’s as those two marks are from each other.  It would be inconsistent to allow TiVo’s and Searchteq’s marks to co-exist on the trademark registry but block Facebook’s differently styled thumb.

This thumb war seems easily resolved with a well written office action response and if that fails, a co-existence agreement with TiVo and SearchTeq.  Maybe Facebook can work out a deal to get its thumbs up on TiVo boxes allowing users to “like” TV Shows while sitting on the couch.

Thus far only Facebook’s application for using the stylized like button for financial transactions, bill payment services and virtual currency has been approved.  The remaining six applications remain suspended.

The applications for just the word “like” by itself are a little trickier.  Those seven applications are currently being blocked by a 2010 registration for the word “iLike” which has been in use since 2006.  That registration is for a number of services some of which are right in Facebook’s wheelhouse, including, “customized web pages featuring user-defined information, personal profiles and information” and “Internet based introduction and social networking services.”

Currently all seven of Facebook’s word mark applications face a non-final office action.  While Like and iLike are admittedly similar, they are not identical.  If Facebook is unable to convince the examining attorney of the differences between Like and iLike, however, it could appeal to the Trademark Trial and Appeal Board and then to the United States Court of Appeals for the Federal Circuit.  As a second alternative, Facebook could simply work out a co-existence agreement with iLike possibly in exchange for some promotion on Facebook or some other compensation.

There is little doubt, however, that one way or the other Facebook will get its “like” trademarks registered.  The word “like” and the famous like button with the thumbs-up are just too valuable to the company.