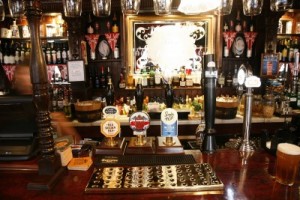 we agree with the District Court that Miller’s is bound by the Fourth Circuit’s decision. Miller’s still has “no protectable interest in the words ‘ale house’ [because] [t]hey are generic words for a facility that serves beer and ale, with or without food.” Ale House Mgmt., 205 F.3d at 141. Because a generic name may not receive trademark protection, the District Court properly granted summary judgment on Miller’s trademark infringement claim.

While Miller’s did present some evidence of consumer confusion, the court found the evidence irrelevant.

Miller’s also argued that Carolina Ale House infringed its trade dress in its décor.  Miller pointed out that Carolina Ale House copied its external red lettering, it severs dress of Khaki’s and polo shirts, its center bar, its open kitchen, and its wood paneling.  In order to be protective trade dress, however, the décor must be unique or otherwise distinctive.  The court held that Miller’s claimed trade dress was not “distinctive” and was therefore unprotectable.

We find nothing particularly unique in a restaurant fixing its name in red letters on the outside of its building and on its menu, branding items it sells with that name, dressing its staff in khakis and a polo shirt, featuring a center bar with a soffit, offering seating at “high-top” tables, and paneling its walls with wood. These are the prototypical features—what we might call the “common . . . design,” Brooks Shoe, 716 F.2d at 858—of a standard sports bar or brew pub. The particular name affixed on the wall and to menu items, the specific color of the polo shirts, the type of wood on the walls, the placement of the “high-top” tables, and the openness of the kitchen,14 “even if they in combination could be deemed unique,” Wiley v. American Greetings Corp., 762 F.2d 139, 142 (1st Cir. 1985), are all “mere refinement[s]” of this “commonly-adopted and well-known form of ornamentation,” Brooks Shoe, 716 F.2d at 858.

Miller’s last argument was that Carolina Ale House’s infringed its copyrighted floor plan.  The court was equally unimpressed with this argument.  In order to establish copyright infringement, “protectable” elements must be copied.  Here Miller’s argued that Carolina Ale House copied its center bar design, its booth seating to the left of the bar, its high-top tables to the right of the bar, the location of its kitchen and the location of its restrooms.  The court held that these elements, even in combination, was not sufficient to support a claim of copyright infringement.

Because there are only a limited number of ways to turn a rectangular building into a sports bar and restaurant, “similarities in the general layout of rooms can easily occur innocently.”
…
After an examination of the respective floor plans, we agree with the District Court “that the differences here are dramatic and overwhelming, and that the similarities between [Boynton Carolina’s] layout and Miller’s floor plan exist only at the broad conceptual level.”

So despite the similarities between the two ale houses, the Eleventh Circuit found that there was no infringement, merely fair competition.