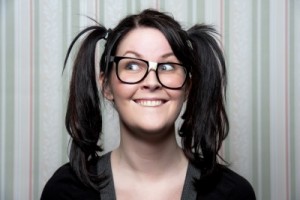 Back before anyone could remember, a “geek” was a carnival performer who entertained and disgusted his audience with morbid and gross stunts.  Today, the carnival stunts are left to modern day performers such has superstar Johnny Knoxville and his Jackass crew who no one would refer to as “geeks.”

Today, geeks distinguish themselves by being able to read binary and hexadecimal numbers as well as trace the origins of the movie Blade Runner to the book “Do Androids Dream of Electric Sheep?“

So it is natural to use the work “geek” in conjunction with the sale and service of computers, right?  That’s what Newegg believes, rebuking a cease and desist letter from Best Buy which demanded that Newegg cease its use of the trademark GEEK ON.  According to Best Buy, its rights in its various GEEK SQUAD marks are being damaged by Newegg’s GEEK ON mark.

As the old adage goes, a good sketch is better than a long speech.  Compare the logos for yourself: 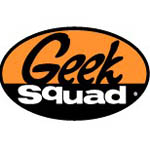 Given Best Buy’s long-standing prior use of the GEEK SQUAD mark, Geek Squad Trade Dress, and Tie and Power Button Design, Best Buy is concerned that Newegg’s use of the Geek On Logo is likely to create confusion among consumers and to dilute the distinctive quality of the GEEK SQUAD mark in violation of Best Buy’s trademark rights.  Best Buy is particularly concerned because the Geek On Logo features the GEEK-component of Best Buy’s GEEK SQUAD mark, is depicted in the same orange-and-black color scheme as Best Buy’s Geek Squad Trade Dress, features a power button design that is very similar to the Geek Squad Tie and Power Button Design, and is used to promote Newegg’s competing consumer electronics retail services.

No mention was made by Newegg of the combination of Geek, the power button, and a black and orange color scheme.   Thus far Best Buy has not filed suit and Newegg continues to use its Geek On logo.  It will be interesting to see if either company decides to geek out and take further action.