Does the service mark Brewskee-Ball infringe the trademark Skee-Ball? 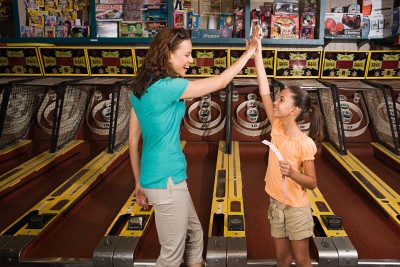 Skee-Ball, Inc. the owner of the Skee-Ball brand of games — popular at amusement arcades for more than 100 years — filed a trademark lawsuit against Full Circle United (“Full Circle”), a company that runs Skee-Ball tournaments under the name “Brewskee-Ball.”

In Skee-Ball, Inc.’s complaint, the company points out that the trademark Brewskee-Ball incorporates the famous mark Skee-Ball in the mark itself as well as in its the description of services.  Specifically, Brewskee-Ball was filed for the following services, “Entertainment in the nature of skee-ball games; entertainment services, namely, arranging and conducting of skee-ball competitions; providing a website that provides statistics for skee-ball league players; providing recognition and incentives by the way of awards to demonstrate excellence in the field of skee-ball.”

Skee-Ball, Inc. points to TMEP Section 1402.09, which states that another company’s trademark should not be used in the identification of services for a different company’s mark.  Rather, a generic word should be substituted. (Which, of course, begs the question – what is the generic name for Skee-Ball?)

In response, Full Circle argues that the word “skee-ball” has become generic for the game and that the trademark office required it to use the word “skee-ball” in its description of services.  Full Circle further argues that it has a federal registration for Brewskee-Ball, which it obtained in 2008 without opposition from Skee-Ball, Inc..  (Most likely, the application was not on Skee-Ball, Inc.’s radar as a search for “skee” or “skee-ball” would not turn up a pending application for Brewskee-Ball.)

There is an obvious connection between the trademark “Skee-Ball” and the service mark “Brewskee-Ball.”  Without a doubt, Brewskee-Ball is merely the word “brew” added to Skee-Ball.  That being said, it is difficult to imagine that anyone would believe that “Brewskee-Ball” was somehow sponsored by the manufacturers of Skee-Ball machines, rather than the bar where the tournament takes places.  Moreover, an increase in popularity of “Brewskee-Ball” would only serve to increase the sales of official Skee-Ball machines.  Skee-Ball, Inc. could even come out with a “tournament” line of machines to sell to bars that wanted to host tournaments.  Another synergistic opportunity lost to trademark litigation.

If Skee-Ball, Inc. is concerned with the tournament name “Brewskee-Ball” is it also concerned about the names of the teams in the Brewskee-Ball league?  Does the Skee Amigos, Skee Patrol, or Skee’s Company further infringe the Skee-Ball brand?  We will just have to wait and see as this case is just getting started.

The case was originally filed by Skee-Ball, Inc. in California.  Recently the court in California transferred the case to New York after Full Circle filed a motion to dismiss for lack of personal jurisdiction in California.  Now the fun moves back east as this case continues.