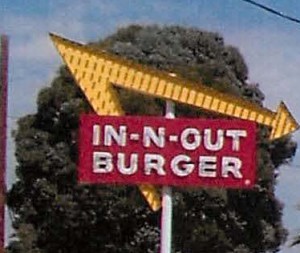 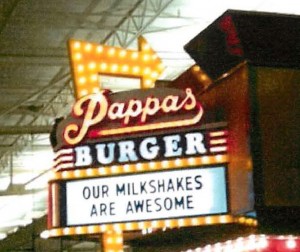 13.  The use by Defendant of In-N-Out’s mark is likely to cause confusion, mistake or deception, as those encountering Defendant’s signage may mistakenly assume, at least initially, that its restaurant is in some way sponsored, endorsed, approved by or connected with In-N-Out when in fact it is not.

14.  Upon information and belief, Defendant has performed the aforesaid acts with wrongful purposes and knowledge to inappropriately trade upon In-N-Out’s extensive goodwill including using In-N-Out’s mark to draw attention to their restaurant.

Is it possible that someone looking at the sign from a distance might be confused?  That seems more likely.  The fact that the arrow is yellow, uses similar lights, and has as a slight bend in the middle does not help either.

Prior to this lawsuit being filed, In-N-Out sent letter to Pappas Burger, but could not reach a resolution to the dispute.

Pappas Burger has not yet answered the complaint.  However, my guess is that this case will quickly settle since the directional arrow is only used by Pappas Burger at its Houston airport location (and is not part of the Pappas Burger logo at other locations).