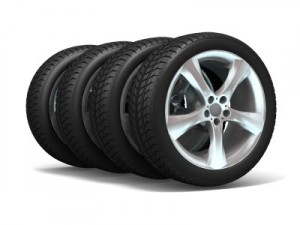 Would you be confused into thinking MILANZA was the same tire as either POTENZA or TURANZA?  Do you even know the name of the tire on your car?

Bridgestone owns the marks POTENZA and TURANZA for tires.  In March 2004, a competing tire manufacturer, Federal, filed an intent to use trademark application for the mark MILANZA for tires.

Bridgestone then appealed to the United States Court of Appeals for the Federal Circuit.

Bridgestone argued that POTENZA and TURANZA are strong marks consisting of coined terms and that the  marks are heavily advertised and widely sold.  Bridgestone argued the market strength and  public familiarity with the POTENZA and TURANZA means that the public is likely to be confused when it encounters a mark such as MILANZA which has a similar sounding suffix and an Italian connotation.

Federal argued that the marks have obvious differences and different connotations.  Federal argued that its mark MILANZA is suggestive of Milan, while the Bridgestone mark POTENZA is Italian for power and the Bridgestone mark TURANZA suggests a touring tire.  Moreover, Federal states that it chose the ZA ending because it is a Taiwanese company and the ending ZA in Chinese imparts emphasis.  Federal also argued that marks with a ZA or NZA ending are common in the automotive industry, citing the Suzuki FORENZA, the Toyota VENZA and the mark MONZA for various automotive products.

When the goods are identical, the appearance of a mark of similar sound, appearance, or connotation is more likely to cause confusion than if the goods are significantly differ-ent. See Century 21 Real Estate v. Century Life of Am., 970 F.2d 874, 877 (Fed. Cir.1992) (“When marks would appear on virtually identical goods or services, the degree of simi-larity necessary to support a conclusion of likely confusion declines.”). Exact identity is not necessary to generate confusion as to source of similarly-marked products. See Saxlehner v. Eisner & Mendelson Co., 179 U.S. 19, 33 (1900) (“It is not necessary to constitute an infringement that every word of a trademark would be appropriated. It is sufficient that enough be taken to deceive the public in the purchase of a protected article.”).

The Federal Circuit concluded that the TTAB’s ruling should be reversed.

In light of the identity of the goods, the lengthy prior use of POTENZA and TURANZA, the market strength of the POTENZA and TURANZA marks, and the similarities of words, sounds, and connotation with MILANZA, suffi-cient similarity has been shown as would be likely to cause consumer confusion, deception, or mistake. We conclude that the Board erred in denying Bridgestone’s opposition to the registration of MILANZA for intended use with tires. The Board’s decision is reversed.

This case seemed to turn on the strength of Bridgestone’s sales and marketing evidence.  It is unlikely that the average consumer pays much attention to tire sub-brands like the POTENZA and TURANZA.  It is therefore certainly conceivable that a consumer could see an ad for Bridgestone TURANZA, go into a non-Bridgestone the tire shop and be confused when encountering MILANZA.  In addition, although not cited in the opinion, during oral argument at the Federal Circuit the questions from the judges seem to indicate that they suspected that Federal chose the name MILANZA because it is confusingly similar to POTENZA and TURANZA.  This may have tipped the balance in an otherwise close case.